Previous Next
How Stigma Prevents People from Pursuing Hearing Care 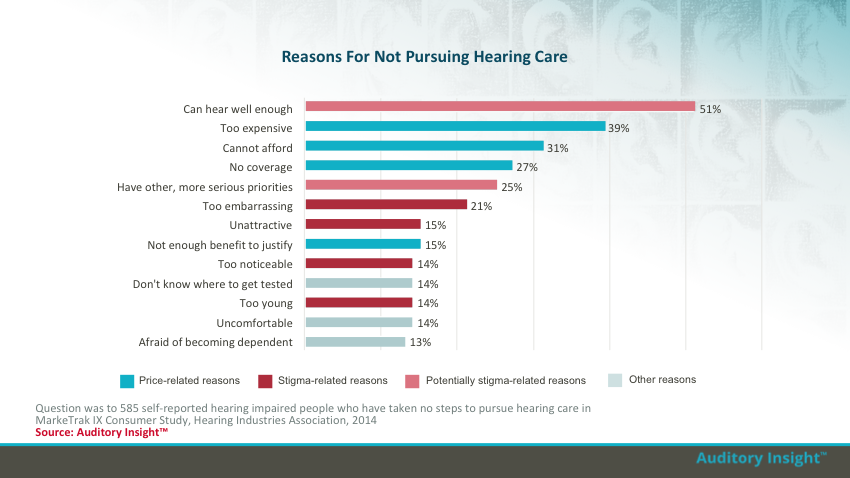 Although many hearing healthcare executives and practitioners would agree that societal stigma against hearing loss impacts consumers’ decision on whether to seek care, quantifying the impact of stigma can be difficult. However, carefully examining the reasons why consumers do not take action when they suspect a hearing loss opens up a window into measuring stigma’s effect.

In the MarkeTrak IX Consumer Study conducted by the Hearing Industries Association in 2014, the most often-cited reason for consumers not taking the first step of visiting a hearing care professional was “can hear well enough,” by 51 percent of the respondents with self-identified hearing loss. (Respondents were able to select multiple reasons.)

Stigma-related issues were also predominant, garnering in all 64 points. Twenty-one percent of respondents described hearing aids as “too embarrassing,” 15 percent selected “unattractive,” 14 percent claimed that the hearing aids were “too noticeable,” and 14 percent felt that they were “too young” to wear hearing aids. Of course cost concerns played a key role in patients’ decisions not to seek help. The reasons “it’s too expensive,” “cannot afford,” and “no coverage” totaled 94 points.

Patients’ lack of engagement with hearing care also clearly surfaced in the responses. In addition to the number one answer of “can hear well enough,” 25 percent noted that they “have other, more serious priorities.” This lack of engagement from addressing hearing loss potentially stems in part from the fear of societal stigma.