Previous Next
A Hearable’s Game-Changing Features 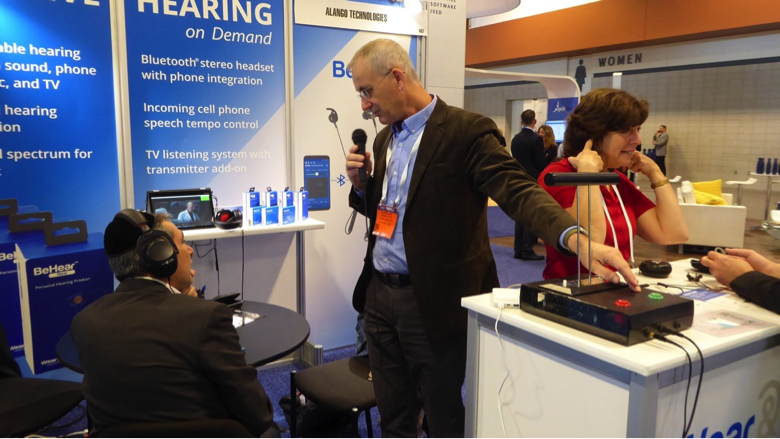 At AAA 2018, Alango Technologies’ BeHear NOW hearable caught my attention for its game-changing hearing assessment and revolutionary Easy Listen feature, which slows down speech during phone calls. Although my company, Auditory Insight, has submitted a marketing proposal to Alango (disclosure), I nonetheless want to share this product’s two features because they are fundamental to the future of hearing care. 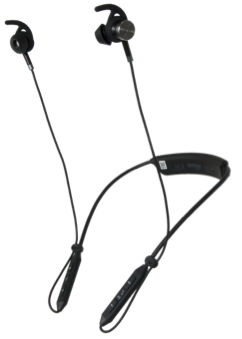 The BeHear NOW wireless earphones, a personal sound amplification device (PSAP), amplify sounds for users based on a hearing assessment that users take with the accompanying app. Alango plans to retail the BeHear NOW headset at $249. The beta device is currently with 100 Android smartphone testers, while the company works to support iPhone connectivity, with general availability targeted for this summer.

The BeHear NOW hearing assessment is truly game-changing. While wearing the headphones, users move a slider up a notched bar until they hear the tone. “Each notch on the bar represents one decibel,” explained Ruth Bridger, Alango Marketing Director, while I took the assessment at Alango’s booth. 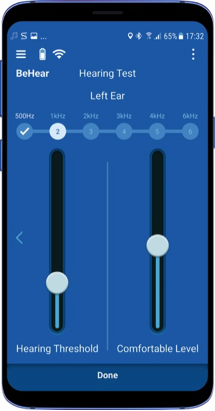 I discovered that once I identified the sound of the tone, I could edge the slider back down, hearing it at quieter amplitude than first detected. Then I picked the most comfortable loudness. First diagnosed with my hearing loss at age 6, I have walked into countless soundproofed booths for a test I consistently fail. BeHear NOW’s self-paced test provoked minimal stress for me, potentially delivering more accurate results, echoing previous studies on the accuracy of self-fitting.

In addition, BeHear NOW has another feature not matched by the other hearables: Easy Listen, which allows users to slow down other parties’ speech dynamically during a phone call. Initially, I was skeptical. But when Bridger rattled off her childhood phone number at a very fast clip, I heard the numbers clearly, at a slower pace, the pitch of her voice unchanged. “We’re taking advantage of natural pauses in speech,” she explained.

Phone conversations are often among the most challenging hearing situations for people with hearing loss, because so many rely on speech-reading and facial clues. Yet simply amplifying the conversation doesn’t solve the problem. Instead, people with hearing loss need better clarity, exactly what the Easy Listen feature provides. The feature is aptly named because it takes away the stress of straining to hear on the phone.

BeHear NOW’s parent company, Israel-based Alango Technologies, develops sound enhancement technologies that are used in voice and audio systems, typically in the automotive and entertainment industries. The fact that the company is now porting its sound algorithms into affordable hearing assistance devices, combined with user-empowering features, is one promising example of innovation in hearing healthcare.